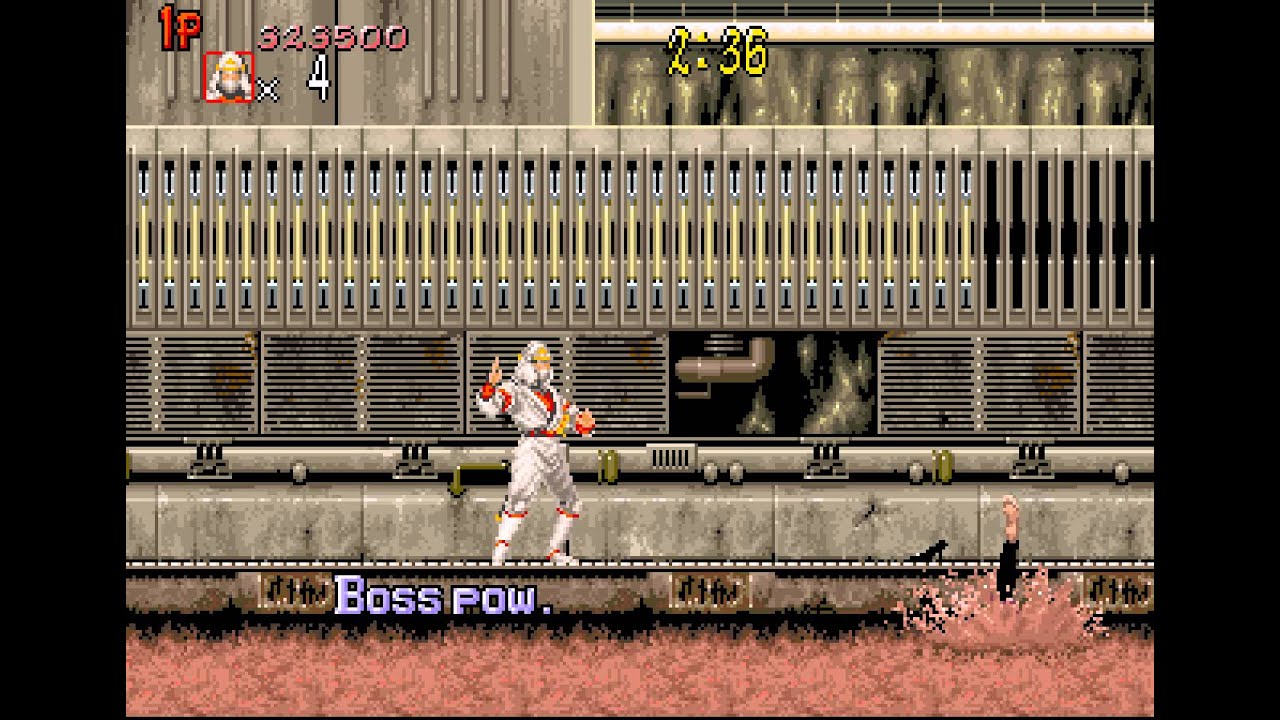 Developed and published by Sega in 1989.

Developed by Sega as a sequel to Shinobi, Shadow Dancer sticks closely to the formula set down in the original game. Where as the original game saw Joe Musashi rescuing kidnapped pupils of his school of Ninjitsu, this time he is required to locate and disarm a series of time-bombs that have been left around the city by agents of a power criminal criminal syndicate.

The one significant difference in this sequel is the addition of Musashi’s snow-white canine companion who can be used to distract enemies. The dog will change stance to a pouncing position and will begin barking when he has locked on to a target; pulling down and pressing the attack button will send the dog forth to attack the target. The dog will attack the enemy for a few seconds, interrupting their own attacks and giving you a window of opportunity to take them out with a well-placed shuriken. It’s important to note that if the enemy is not dispatched swiftly, he will throw the dog off, who will shrink down to the size a puppy and cannot be used again until the next bomb is disarmed or the player progresses to the next stage.

Whilst the dog does add a new level of gameplay, the activation mechanic is poorly implemented. You will spend a lot of your time attacking whilst crouched to avoid oncoming bullets, knives and other enemy projectiles, but this meant that I was constantly ordering the dog to attack when I didn’t want him to. Quite often, he’d charge off towards a distant enemy and get himself “puppified” before I could take the enemy out. This is compounded by the fact that not all enemies can be harassed by the dog (unless they leave themselves open to attack), so I was often left with a harmless puppy at the most inopportune time.

Joe is armed with an unlimited supply of shuriken that he can hurl at enemies, as well as attack with a sword if he comes into melee range. Basic thugs and gunmen can be taken out without much difficulty, but tougher enemies such as the green disc-hurling thugs and enemy ninja, can block shuriken and are only vulnerable when they let their guard down. Timing of the essence is required to take these enemies down without getting killed in the process. On the later levels, these blocking enemies are placed on platforms that are difficult to reach and this makes the game incredibly frustrating. Collecting bombs will occasionally double your weapon power (flaming shuriken!), which cannot be blocked by enemies and would be a huge help if it wasn’t for the fact that it’s usually hidden in a bomb close to the exist; it comes far too late to be of any use.

As a final resort, Joe can cast ninja magic that will take out any enemies on the screen in a hail of tornadoes, flaming dogs or a strange Buddha-esque figure. Magic is limited, so it should only be used when absolutely necessary.

Each stage ends in a showdown with a large and powerful boss that requires multiple hits to defeat. Joe must fight a bomb-hurling cybernetic ninja, fireball shooting train and a woman wearing a seriously tight leotard, who hurls large metal doors like boomerangs. It’s definitely worthwhile saving any ninja magic to use on these bosses, particularly the final boss as she is a real pain to beat under normal circumstances.

Perhaps the most memorable feature from the original Shinobi was the shuriken-hurling bonus stage that looked incredibly cool for the time. Once again, an equally impressive looking bonus stage is included that sees you hurling shuriken at multi-coloured ninja leaping down from the top of a building. If any ninja manages to leap from the bottom platform then the bonus level is forfeit and you get a giant ninja boot in the face for your trouble. While the level looks very cool, the ninja that emerge all have preset movement paths. The temptation is to attack enemies that appear furthest from your current position, but these ninja are programmed to move across the whole platform before leaping off, exposing you ninja who then appear on the other side and leap off instantly. The key to success is knowing exactly how each of the ninjas will move as it’s all predetermined.

Having played the game, I have to confess that I’m not a massive fan of it. The placement of enemies in later levels is deliberately unfair and you’ll find yourself dying many times trying to defeat them. The dog seems like a great idea unless, like me, you spent most of the game cursing as fido rushes off against your will, only to come back with his tail between his legs.

Shadow Dancer isn’t a bad game by any means, but I personally enjoyed the Shinobi games on console a lot more. Even so, it’s still a solid (if frustrating) addition to the franchise.
#retrogaming